“The situation is not a very happy one,” Prof. Norton told delegates in the European Parliament on Thursday (8 March). “All these ambitious plans have all faded away” for economic or political reasons, he said referring to the four CCS demonstration projects that have been cancelled at EU level in recent years.

The bottom line, he said, is that “the carbon price in Europe is much too low” to make the technology economically worthwhile and stimulate private investment.

“And this is a major loss of potential mitigation technologies, which has significant implications for the future,” he warned, saying funding issues linked to CCS “must be addressed with more determination”.

Similar warnings about CCS deployment have been made in the past. But they have tended to come from business circles, which inevitably raises suspicion of lobbying from fossil fuel industries.

This time, however, it came from EASAC – a body representing the national science academies of all 28 EU member states, plus Norway and Switzerland. As such, EASAC’s opinions carry considerable authority because they are free from political interference and represent a broad consensus among the scientific community.

Prof. Norton was speaking at the Brussels launch of a new report by EASAC, which looks at the role “negative emission technologies” – or NETs – can play in meeting the Paris Agreement target of limiting global warming to well below 2 degrees Celsius.

NETs such as afforestation and reforestation, ocean fertilisation, or direct air capture and carbon storage (DACCs), are seen as last resort options to address climate change by directly removing CO2 from the atmosphere.

Some scientists believe humanity has already missed its chance to limit global warming to between 1.5 and 2 degrees Celsius, saying geo-engineering technologies are the only solution left to address climate change.

But none of them can be deployed at the scale necessary to address the global warming challenge, Norton said.

Referring to a direct air capture plant in Switzerland, Norton said “between three and four million of those” would be needed to suck up CO2 at the gigaton level required to meet the 2°C target. Deploying at the scale and speed necessary would be equivalent to creating an industry the size of the car sector in less than a decade, he said.

“It’s a race against time and we are losing it,” Norton warned. 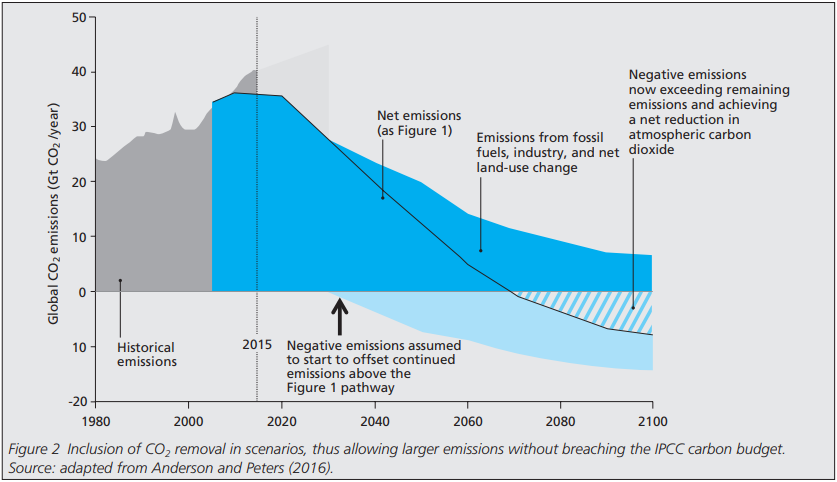 In fact, the EASAC report is broadly sceptical of NETs as a climate mitigation tool, saying “none” of them – including CCS – have the potential to deliver CO2 removal at the scale and rate needed to keep global warming below 2°C.

Relying on NETs may even have “serious implications for future generations,” EASAC warns, saying they should provide no excuse for tackling emissions in areas such as industry, transport or buildings.

That said, CCS remains the only “established” technology that can play a part. “Recent evaluations confirm the critically important role of CCS in any strategy for limiting temperature rise to 2 °C,” the report says.

How much CCS do we need?

Doubts about CCS remain, however.

Although the technology “will be needed” to address climate change, CCS also requires a higher price of CO2 to be economically viable, said Maria Velkova, an official in charge of finance for low-carbon innovation at the European Commission.

“I’m not saying we don’t need to support CCS,” Velkova explained, saying the EU executive has underlined the importance of the technology “for the power sector but most of all for the industry sector” – especially after 2030. “If we think we need CCS for 2030, it means we must start now,” she stressed.

“But the question is how much CCS do we need,” she cautioned, saying the initial enthusiasm around CCS had been dampened by rapidly falling costs of renewable energies and energy saving technologies.

“Member states – quite understandably – have decided to invest first in the technologies which are the cheapest,” Velkova said.

“I’m not saying we don’t need [CCS],” Velkova continued. “But we need to revise our EU-level strategies to see how much CCS we would need in light of high penetration of renewable energy” and other low-carbon technologies such as hydrogen, which can help decarbonise the steel or cement sector.

“Of course this raises the question of how much electricity you need to produce hydrogen. So the questions are really complex,” she said, adding that the Commission was currently working on a “mid-century strategy” that will assess options for low-carbon technologies.

Kirsty Anderson, senior advisor at the Global CCS Institute in Australia, said negative emission technologies are “critical” to meet the 2°C warming target of the Paris Agreement. “The longer it takes to deal with CO2 mitigation, the more important these CO2 removal technologies become,” she pointed out.

“But in now way do they reduce the importance of taking mitigation action now,” she stressed.

“CCS is a no regrets option,” Anderson said, pointing to new infrastructure projects currently underway in the UK, Norway and the Port of Rotterdam in the Netherlands aimed at transporting CO2 from industrial processes for injection into depleted oil and gas fields in the North Sea.

“If that nut can be cracked, we’ll have a really good chance of seeing CCS to start deploying,” Anderson said.

A catalyst for carbon capture and storage