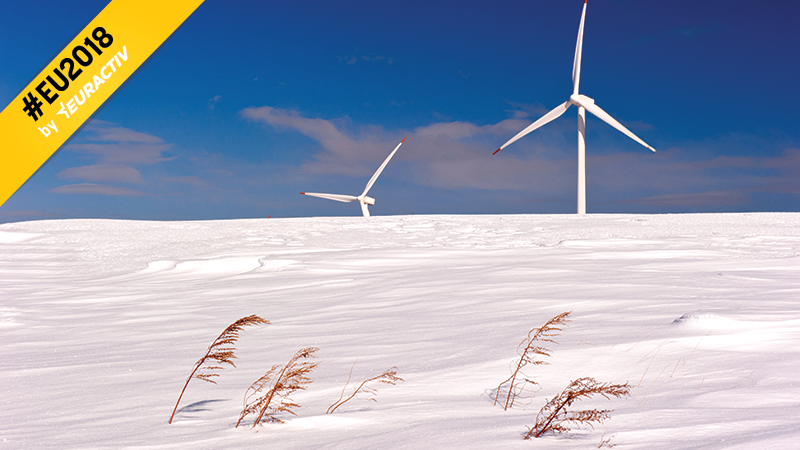 2018 will see the EU institutions continue to pursue a decarbonised economy. [Shutterstock]

2018 looks set to be a defining year for energy and environment policy in Europe, as important legislative files move towards becoming EU law.

In November 2016, the European Commission proposed its Clean Energy Package and 2017 was mostly geared towards the other European institutions agreeing on their own positions.

With that key step almost complete, 2018 will see EU lawmakers, officials and member states meet to negotiate and hammer out laws that will take the bloc all the way up to 2030.

The European Parliament and Council have already mapped out their negotiating positions for the renewable energy, energy efficiency and governance files, while the member states have also finalised their electricity market directive position.

January will see MEPs meet in Strasbourg to vote on the first three files and there is still time for changes to be made, given the close nature of how the Parliament’s environment and energy committees voting went.

The Energy Efficiency Directive (EED), in particular, could provide a late sting in the tail, after the file’s lead MEP, Polish Socialist Democrat Adam Gierek, resigned after December’s committee vote, citing a lack of support from his colleagues.

Next week could provide an opportunity for lawmakers disgruntled by the energy committee’s position to rally and make further amendments to the European Commission’s initial proposal, which includes a 30% efficiency target

MEPs are yet to vote on EPP lawmaker Krišjānis Kariņš’ draft report on electricity market design but the energy committee is likely to evaluate his efforts in the first semester of the year, with a trilogue possible before Q3.

Some files on energy policy post-2020 have already been taken care of, including updates to the complementary Emissions Trading System (ETS) and Effort Sharing Regulation.

Both wrapped up in the last quarter of 2017 and member state representatives will be given the chance to give them the stamp of approval, with both entering into force 20 days after their publication in the EU’s official journal.

This year, the EU will lose the accolade of having the biggest emissions trading scheme in the world, as China rolls out its own model stage by stage. The ETS grew slightly last year when the bloc agreed to link the system to Switzerland’s.

Whether the EU decides to expand its trading operations further remains to be seen, although an eventual linkup with climate action-leader California or even China itself has been suggested.

The Estonian presidency was also able to broker an informal agreement between Council and Parliament on the land-use, land-use change and forestry directive (LULUCF). Due to its close links with the ESR, a final decision will have to wait until that piece of legislation is finalised.

Regarding the Clean Energy Package, the Energy Performance of Buildings Directive (EPBD) has also entered the home straight, after a deal was struck right at the end of the calendar year.

EPP lawmaker Bendt Bendtsen was able to gather cross-party support for the Parliament’s position and. Although it took three rounds of talks, all three EU institutions were able to find enough common ground to agree on one final text.

But it remains to be seen what kind of cake the EPBD cherry will sit atop, as its potential to provide energy savings and renovation is largely reliant on the EED.

Despite EU Climate Commissioner Miguel Arías Cañete’s disappointment with the e-mobility aspects of the agreement, it is impressive that the file has at least gone from proposal to near-completion in around 18 months. The ETS and ESR updates have been gestating since the Council issued its guidelines back in 2014.

Most member state-level negotiations on the Clean Energy Package were held under the rotating EU presidencies of Malta and Estonia. One of the final acts of the latter was a marathon session in which three so-called general approaches were agreed.

Those agreements were largely met with criticism by green lawmakers and NGOs, who accused member states of forgetting the Paris Agreement and even perpetrating a “climate crime”.

A joint position on electricity market design, which Estonia was keen to reach given its presidency’s focus on digital issues, was given particularly short shrift as the issue of fossil fuel subsidies once again divided member states.

With Bulgaria taking over the helm for the very first time since joining the EU in 2007, Sofia has announced that regional energy cooperation will be one of its main priorities.

At an informal energy meeting in Tallinn in September, Bulgarian Energy Minister Temenouzhka Petkova revealed that strengthening EU ties and infrastructure with the Western Balkans would be given particular focus.

Bulgaria will also prioritise matters relating to the Euratom nuclear treaty and the International Thermonuclear Experimental Reactor (ITER project), by guiding a new mandate for the Commission and a new financing programme through the Council.

Negotiations on both these issues could be problematic, given the United Kingdom’s Brexit vote. Westminster is still unclear on whether it indeed intends to leave the Euratom framework but has indicated it is willing to continue its ITER funding commitments.

As holders of the Council presidency, Bulgaria will also be tasked with chaperoning the member states during the trilateral negotiations on renewables, energy union governance, energy efficiency and, if the Parliament is ready, electricity market design.

If not, it will be up to Austria to pick up the slack when it takes over the presidency baton in the second half of the year.

The highly-politicised issue of Nord Stream 2, a controversial gas pipeline that would link the EU directly to Russia via Germany, will also continue well into 2018. The main issue at stake is whether the EU’s internal energy market rules apply to offshore pipelines linked to third parties.

Rule changes are in the offing as the Parliament will soon vote on Polish MEP and energy committee chair Jerzy Buzek’s draft report on internal gas market laws.

The European Investment Bank will also have to decide whether or not to grant the Trans Adriatic Pipeline (TAP) project a loan of €2bn, the biggest in the EU bank’s history.

A decision was deferred in December, after the project came under fierce scrutiny for linking to the Southern Gas Corridor, a network of pipelines originating in the gasfields of Azerbaijan and the Caspian Sea.

Looking further ahead, the international community will meet at the beginning of December in the Polish city of Katowice for the 24th edition of the UN climate conference.

COP24 is already being billed as a true litmus test of how countries are implementing the obligations of 2015’s Paris Agreement.

Environment policy and the circular economy will also be addressed this year, with the first real contribution being the Commission’s long-awaited Plastics Strategy.

Due to be presented at the end of the month, the package of proposals will come under the EU executive’s circular economy action plan. The main issues that will be broached are expected to be virgin fossil fuel use in plastic production, recycling rates and plastic leakage.

This month, China’s ban on imported plastics for recycling comes into force and the EU will have to decide how to react. UK environment chief Michael Gove has been criticised for not being aware of the ban and there are reports that processing facilities are already nearing capacity as the waste builds up.

Member states will have to either find another third country willing to take in their waste, invest in more recycling facilities or resort to burning and land-filling, within the existing legal framework.

Increasing levels of plastic in the environment has come under the spotlight more and more, and the EU was represented at the UN’s recent high-level summit on pollution by Environment Commissioner Karmenu Vella.

Germany will reportedly also call on the Commission to come up with a proposal to ban microplastics in the cosmetic industry and the EU executive will also have to decide whether to heed the calls of green NGOs to implement a full ban on mercury in dentistry.

An introduction to the state of wind power in the U.S.