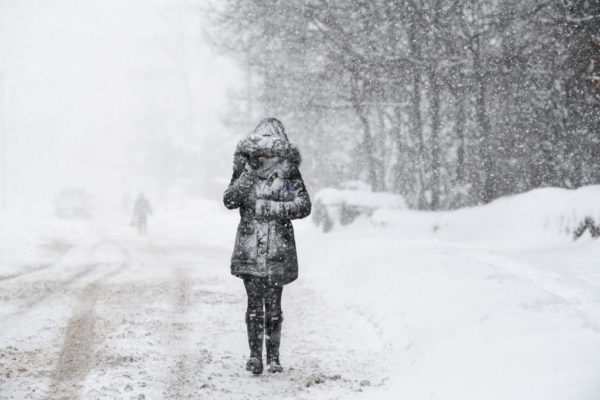 Conditions in Balloch, Scotland on March 1. The “Beast from the East” has led to red weather warnings for snow for the first time over much of the country. Photo: Jeff J Mitchell/Getty Images

As the UK battled a major snowstorm, it also started to run dangerously low on gas. So what happened? And what does it mean for the country’s energy supply in future?

There have been many false dawns over the years but it seems the much-touted UK energy crunch is now finally upon us.

One of the most extreme winter weather events in living memory – affectionately known as “The Beast from the East” – has brought about a series of disturbances to the country’s gas supply, driving prices way up.

National Grid has done its job in these most challenging of circumstances, issuing a warning yesterday morning that was resolved fewer than 24 hours later.

In the end, wind power came to the rescue – but experts believe Monday could pose further problems.

So what actually happened?

Besides of course the freezing temperatures, the UK was grappling with a few significant (but not crippling) blows to its gas infrastructure.

Rough, the gas storage facility which until last year represented nearly three quarters of the UK’s gas storage capacity, is closing down. It needs repairs and gas prices aren’t what they once were. Even then, Rough was still supposed to help out yesterday but couldn’t on account of the cold.

Joseph Dutton, from think-tank E3G, told Unearthed: “Rough was meant to be emptying its last remaining gas, but actually suffered a fault related to the cold weather.

“Having Rough working would have offered some extra supply, but not completely addressed the situation.”

Meanwhile three gas power stations were out of commission for most of the day: Pembrokeshire, Staythorp and Langage.

Ironically that may have helped the supply situation – albeit at the expense of carbon – as old coal stations appear to have provided some of the replacement capacity.

Tom Edwards, energy analyst at Cornwall Insight, credits the grid with spotting the prospect of a gas crunch months ago, and for acting swiftly on the day.

He told Unearthed: “The grid correctly predicted in its winter outlook there could be tight periods during cold spells but that the UK has the import infrastructure to handle bringing in enough gas to meet our needs.

“The warning in the morning worked as intended, signalling to the gas market that prices should rise to ensure flows reached Great Britain from continental markets, storage and LNG ports.”

This, he explained, is part and parcel of the UK’s longtime energy policy: “The government in its 2012 gas strategy decided not to subsidise any new or old gas storage sites, choosing to rely on import infrastructure and market mechanisms, meaning network and subsidy charges will remain low most of the time, but allowing prices to rise over peak periods to bring gas into the country when we’re short.”

Fortunately, despite coming in for criticism in this morning’s newspaper editorials, Britain’s wind turbines picked up the slack on the electricity side of things.

And cheaper coal – given the high gas price – came roaring back. Which is hardly ideal, but it is the way the system is designed until coal is phased out in a few years time.

Basically, things could have been much worse.

“There were no major failures of infrastructure, as most pipelines and storage sites remained open or after outages reopened fairly shortly,” Edwards said.

“The power system was well supplied with wind, coal and nuclear. As gas is the swing power producer, gas demand could have increased substantially if wind or coal had dropped off the system.”

One company you may have heard from over the past few days is Ineos, the chemical giant trying to make shale happen in the UK.

The firm repeatedly declared it would temporarily reduce gas use at its chemical manufacturing facility in Runcorn in order to help out the grid.

However, the grid said it had not instructed industrial users to do that: “Any larger users of gas that have reduced their demand will have done so under commercial arrangements with their gas supplier.”

Also, in what appears to be bragging – but equally undermines its gas offer – Ineos told the BBC it did not expect the move to make a material difference as it gets most of the heat it needs from its own energy-from-waste plant.

Emily Gosden, energy editor at The Times, notes that Ineos has taken this opportunity to boost the case for fracked gas, appearing prominently on the BBC’s flagship radio news show Today.

Edwards isn’t convinced: “Shale is probably not a panacea, as we don’t yet know the geology. It has widespread opposition and even estimated shale resources would only offset some of the losses from our conventional fields.”

Others argue the solution could be insulation, something which the government has been neglecting for several years now.

According to think-tank E3G, public investment in energy efficiency has fallen by nearly 50% over the past five years.

“Instead of ever-searching for more gas, we should be looking to wean ourselves away from gas.

“The UK is hugely over-reliant on gas for electricity and heating, which can lead to issues such as yesterday if there are supply worries.

“Decarbonisation of heating is far from easy, and will likely cause ministers headaches for years to come, but in the meantime we can cut how much energy we waste by properly insulating our homes, which will reduce the amount of gas the UK burns.”

Lessons from Cyclone Gaja: how to limit the impact of extreme weather in developing countries

Refracking is the new fracking