The alarming headlines about Australia’s bush fires over the last couple weeks have heightened the global outcry over climate change, and companies, NGOs, and governments are taking action.

One of the most ambitious targets was set last week by Microsoft. In a press conference on January 16, CEO Satya Nadella announced that not only does the company plan to be carbon negative by 2030, but if it succeeds, the move will effectively cancel out its lifetime CO2 emissions by 2050.

Whew—that’s a lot, both for the company to commit to and for us to wrap our heads around.

First off, what does carbon negative mean, and how is it different than carbon neutral?

Committing to carbon neutrality has become something of a (laudable, necessary) fad in recent years, with companies like Amazon, Bosch, Nestle, L’Oreal, SAP, Google, and many others reaching carbon neutrality or pledging to reach it in the near future. This means they’re either eliminating their own emissions by, say, switching to 100 percent renewable energy, or they’re buying carbon offsets, which are credits that fund emissions-reduction projects around the world.

It’s not just companies jumping on the carbon-neutral bandwagon; countries and states are too. The UK pledged carbon neutrality by 2050, Hawaii by 2045, and Finland by 2035.

It’s a pretty self-explanatory term, but to make sure we’re clear, going carbon negative means a company or other entity would take actions to remove more carbon from the Earth’s atmosphere than it’s putting in.

Right now, one of the best ways to do this is plain and simple: plant trees. Trees are a pretty amazing thing, and one we probably don’t think about or appreciate nearly often enough; is there anything else that can soak up our emissions, pollution, and dust—and look ethereally beautiful in the process?

Not to be easily outdone, though, tech is hot on nature’s heels with carbon-squashing solutions of its own. Two of the most talked-about are soil carbon sequestration, which involves restoring agricultural soil so it will retain or re-absorb more of its own natural carbon, and direct air capture, in which a giant fan pushes air through a filter that uses a chemical adsorbent to produce a pure CO2 stream, which can then be stored.

How Will Microsoft Do It?

Microsoft has a running start on its goal, as it’s been carbon neutral since 2012. Going negative will take a big push, but the company’s not short on projects and plans to get itself there. 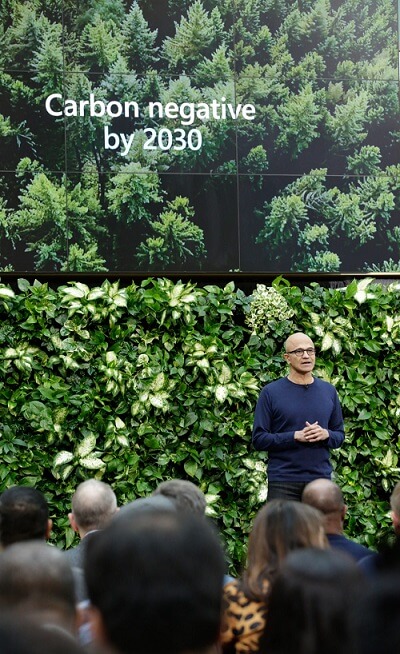 For starters, it will expand the reach of its internal carbon tax—which it upped from $8 to $15 per metric ton last year—to impact its suppliers on top of its own business units. Using suppliers with a high carbon footprint will cost the company more, motivating it to seek out the most planet-friendly and, in a likely ripple effect, motivating the not-as-planet-friendly to get their ducks in a row emissions-wise.

The company will also start measuring its total carbon footprint in a far more conservative way, leaving nearly no stone un-turned: it will account for emissions from employee business travel, its building materials, its existing supply chain, and even the energy its customers will consume when using its products.

Finally, Microsoft is putting $1 billion into a climate innovation fund, which will focus on investments that could drive meaningful sustainability-related impact, additional market impacts on current and future climate solutions, and climate equity considerations.

Given the outsized power and influence tech companies wield in today’s screen-addicted, information-guzzling, data-dependent world, and the unintended consequences the tech sector has visited on it, it’s right for behemoths like Microsoft to be holding high the torch of corporate social responsibility. That responsibility extends across multiple issues, from privacy and security to misinformation, technological unemployment, mental health, and many more.

The well-being of the planet is arguably one of the most urgent of these; after all, if we don’t have a pollution- and disaster-free place to live, all that other stuff won’t end up mattering much.

Speaking at the press conference last week, Nadella summed up the importance of Microsoft’s moonshot emissions plan bluntly and succinctly. “The world is presented with an urgent climate crisis,” he said. “If we don’t curb emissions, science tells us the results will be devastating.”

This article originally appeared on Singularity Hub, a publication of Singularity University.