Carbon Brief analysis shows the UK’s CO2 emissions fell for the sixth consecutive year in 2018, the longest series of continuous reductions on record.

The estimated 1.5% reduction was once again driven by falling coal use, down 16% compared to a year earlier, whereas oil and gas use were largely unchanged. However, there are signs the recent run of reductions could be coming to an end, with 2018 seeing the smallest fall in the six-year series.

The UK’s CO2 emissions were an estimated 361m tonnes (MtCO2) in 2018, some 39% below 1990. Outside years with general strikes, this would be the lowest since 1888, when the first-ever Football League match was played and Tower Bridge was being built in London.

These findings are based on Carbon Brief analysis of newly released energy use figuresfrom the UK’s Department of Business, Energy and Industrial Strategy (BEIS). The department will publish its own CO2 estimates on 28 March.

Update 28/03/2019: BEIS has published its own estimates, showing a 2.4% reduction in the UK’s CO2 emissions in 2018 compared to a year earlier. This is 0.9 percentage points larger than Carbon Brief’s 1.5% estimate. The difference is due to revised BEIS provisional energy use data, also published today. Using these revised figures, Carbon Brief’s model matches the 2.4% cut in CO2 reported by BEIS.

The UK’s CO2 emissions have now been falling for six consecutive years, the longest run of reductions in records going back to 1850 (the blue area in the chart, below).

This is the lowest since 1888, outside three years of economic collapse during strikes by coal miners and other workers in 1893, 1921 and 1926, each of which is prominent on the chart, below.

UK CO2 emissions 1850-2018, millions of tonnes (blue area) and the level in 2018 (yellow line). Source: BEIS, Carbon Brief analysis and the World Resources Institute CAIT data explorer. The CAIT data has been adjusted because it excludes emissions from land use and forestry. Chart by Carbon Brief using Highcharts.

The 1.5% reduction in the UK’s CO2 emissions in 2018 is the smallest decline over the past six years. This highlights the fact that continued cuts cannot be taken for granted.

Still, since 1990, the UK has cut its emissions faster than any other major economy in the world, even as its GDP has continued to grow. Recent Carbon Brief analysis suggests reduced energy demand and a shift to cleaner sources of electricity explain most of the CO2 reductions since 1990.

Per-capita emissions in the UK fell to 5.4tCO2 in 2018, the lowest since 1858, when the population was less than half its current level. On this measure, the UK now ranks alongside France and well below China (around 7tCO2 per capita), but roughly three times the level in India (1.8tCO2).

During those six years of continuous cuts in the UK’s CO2 emissions between 2013 and 2018, almost all of the reductions have been due to coal, as the chart below shows. Overall emissions fell  by a fifth (98MtCO2), with coal accounting for 97% of that total (94MtCO2).

Meanwhile, emissions from oil increased by 4% (6MtCO2), while CO2 from gas was unchanged. (The remainder is made up of changes in emissions from other fuels, such as non-renewable wastes, as well as CO2 from non-fuel sources, such as cement production.)

Notably, coal CO2 emissions now make up just 7% of the UK total. This small share will shrink even further as coal-fired power stations continue to close ahead of a 2025 phaseout deadline. Only 5% of UK electricity generation in 2018 was from coal, a record low.

This means there is limited potential to continue reducing overall UK emissions if coal is the only contributor. Emissions from oil and gas will also have to be cut if the UK is to meet its legally binding carbon targets in future.

As noted above, the largest recent changes in the UK’s fossil fuel use have been in demand for coal. There was another 16% reduction in coal use last year, down to a new low in records stretching back to 1850. This was primarily due to a 24% fall in coal use in the power sector.

The CO2 emissions from the UK’s coal use have fallen by around 80% over the past six years and more than 90% since 1970, as the chart below shows (light blue line). With oil demand also having fallen until recent years (yellow), gas is now the largest source of CO2 emissions in the UK (dark blue).

Demand for gas in the first quarter of 2018 was up 8% on the previous year after exceptionally cold temperatures during the “Beast from the East” in February and March. However, annual demand for gas was flat (+0.5%), in part due to a 4% fall in electricity generation from the fuel.

Demand for oil was also largely unchanged in 2018 (-0.3%). Within that total, demand for diesel and petrol both saw annual declines of around 1%, whereas aviation fuel was up 2%.

Transport is now the single-largest sector within the UK’s CO2 emissions total. This is because transport emissions have barely changed since 1990, while most other sectors have declined. 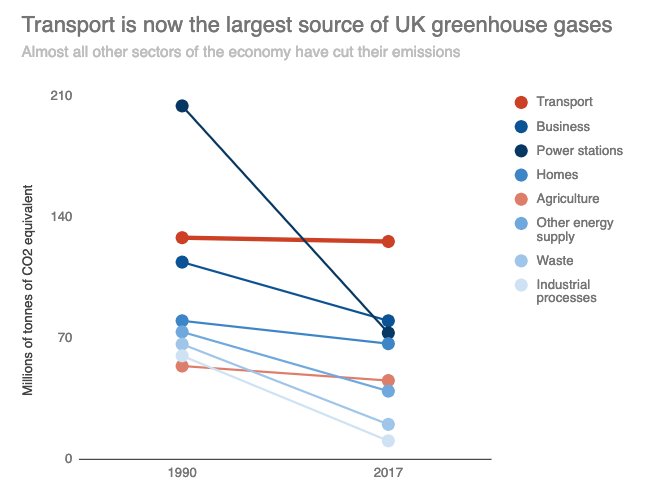 View image on Twitter
The government’s Committee on Climate Change (CCC) has warned of the “worrying trend” in emissions beyond the power and waste sectors. These cuts have “masked” a lack of progress in the rest of the UK economy, it says, putting legally binding carbon targets at risk.

The housing sector is a case in point, according to another recent CCC report. Home CO2 emissions increased by 1% in 2017, the most recent year with sectoral data available.

CCC advice on when the UK should reach net-zero emissions is due on 2 May this year and will add to the pressure to reduce CO2 emissions across the whole economy.

Meanwhile, the CCC recently rated progress in each of 18 policy areas, giving the government a failing grade in 15 of them. Its letter to energy and clean growth minister Claire Perry said government policies had “failed to produce expected reductions in emissions”.

BEIS projections suggest the UK’s emissions will continue to fall over the next decade.

Carbon Brief’s estimates of the UK’s CO2 emissions in 2018 are based on analysis of provisional energy use figures published by BEIS on 28 February. The same approach has accurately estimated year-to-year changes in emissions in previous years (see table, below).

One large source of uncertainty is the provisional energy use data, which BEIS revises at the end of March each year and often again later on. The table above applies Carbon Brief’s emissions calculations to the latest energy use figures, which may differ from those published previously.

For example, last year Carbon Brief estimated a 2.6% fall in emissions in 2017, while BEIS later put the reduction at 3.2%. Using the same Carbon Brief approach today, with the updated energy use figures, the estimated reduction is revised to 2.8%.

Update 28/03/2019: As noted at the top of this article and in the table, above, BEIS has published its own estimate for 2018, as well as revising its provisional energy use data. Its estimated 2.4% annual cut in the UK’s CO2 output in 2018 is larger than Carbon Brief’s initial figure, with the difference explained by the revised energy data.

UK emissions are estimated by multiplying the reported consumption of each fossil fuel by its emissions factor. This is the amount of CO2 released for each unit of energy consumed and it varies for different fuels.

For example diesel, petrol and jet fuel have different emissions factors and Carbon Brief’s analysis accounts for this where possible. This adjustment is based on the quantity of each fuel type used per year, drawn from separate BEIS figures covering oil, coal and gas.

Emissions from land use and forestry are assumed to remain at the same level as in 2017.

Note that the figures in this article are for CO2 emissions within the UK measured according to international guidelines. This means they exclude emissions associated with imported goods, including imported biomass, as well as the UK’s share of international aviation and shipping.

The UK’s consumption-based CO2 emissions increased between 1990 and 2007. Since then, however, they have fallen by a similar amount to the CO2 emitted within the UK. Around one quarter of the bioenergy used in the UK is imported and its climate benefits are disputed.

International aviation is considered part of the UK’s carbon budgets and faces the prospect of tighter limits on its CO2 emissions. The international shipping sector recently agreed to at least halve its emissions by 2050, relative to 2008 levels.