The Green New Deal has broadened imaginations worldwide on the subject of climate change, encouraging people to consider what action to tackle it could do for society. US congresswoman Alexandria Ocasio-Cortez announced the Green New Deal resolution in February 2019, calling for a rapid transition to net zero greenhouse gas emissions, a massive investment in infrastructure and financial redistribution.

While the project would attempt to halt further warming, it would also counter inequality and compensate losers from the energy transition, such as workers in carbon-intensive industries such as coal mining.

It’s already helped wrest the political agenda in the US from the regressive policies and scandals of the Trump administration, and has gained bipartisan support among US voters, despite right-wing pundits denouncing it as a communist plot.

The Green New Deal borrows its name and ethos from the New Deal – introduced in the 1930s by then US president Franklin D. Roosevelt to kickstart an economy crippled by the Great Depression. But are strategies which echo the needs of the 1930s and 1940s – ending the Depression and defeating Nazism – suitable for the rapid transition from fossil fuels that defines our needs in the early 21st century?

Can any strategy which relies on historical analogies be adapted to the current climate emergency?

The Green New Deal’s proposed investment in public infrastructure and focus on inequality mirrors the original aims of the New Deal, but economic transformation will look very different under a Green New Deal. Whereas Roosevelt’s New Deal aimed to grow the economy, its modern equivalent entails shrinking many economic activities currently central to the economy’s operations.

Another way of looking at this is that the original New Deal spurred a massive increase in greenhouse gas emissions. By generating huge public investment in roads and power stations, as well as redistributing wealth through the emerging welfare state, it set the stage for what some call the “great acceleration” in greenhouse gas emissions during and after World War II.

In the US, military build-up was central to this early on, but then it was sustained by the expansion of consumption after the war – most directly by the shift to mass car ownership and urban sprawl that “locked in” high fossil energy use, not only in transport but in housing. 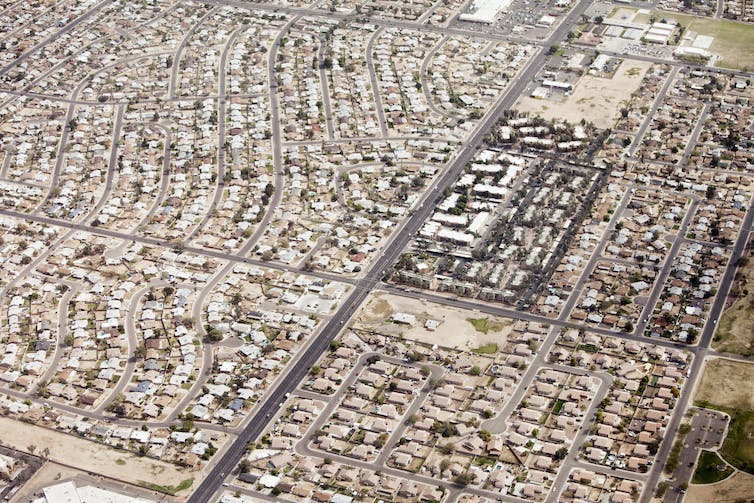 The Green New Deal therefore contains a basic contradiction that anyone pursuing it will have to wrestle with as it develops. Many of the measures proposed – such as investing in infrastructure and spreading wealth more evenly – will intrinsically work in tension with efforts to decarbonise the economy.

They create dynamics that increase energy use at the same time as other parts of the Green New Deal are trying to reduce it. For example, building infrastructure such as new road networks will both create demand for carbon-intensive cement manufacture and opportunities for more people to travel by car.

To reach net zero emissions by sometime early in the second half of the 21st century, as the Paris Agreement and the IPCC Special Report on 1.5°C state we must, the global economy has to decarbonise by at least 3% per year. In rich countries such as the US, this needs to happen more rapidly so that poorer countries, which have contributed less overall to global warming, have more time to adapt.

The targets in the Green New Deal are consistent with this sort of time-frame for decarbonising the global economy. But, even if wealthy countries like the US “only” have to achieve 3% cuts per year, as the economy grows by – say – 2%, then in effect the country has to cut emissions by around 5% per year relative to the growing size of the economy. To illustrate the scale of this challenge, historically, emissions have declined relative to GDP by only about 1% per year, in the aftermath of the 2008 recession.

So the challenge is enormous. But of course, the effect of much of the Green New Deal – to invest in infrastructure, to redistribute income – will be to generate significant economic growth. Indeed, this is the point – to get the US economy out of its present stagnation.

But it’s hard to see how this will be done without generating new sources of carbon emissions – more housing, more cars and more consumption generally. Herein lies the tension that will recur through the life of the Green New Deal, even if it gets through the immediate quagmire of US politics. 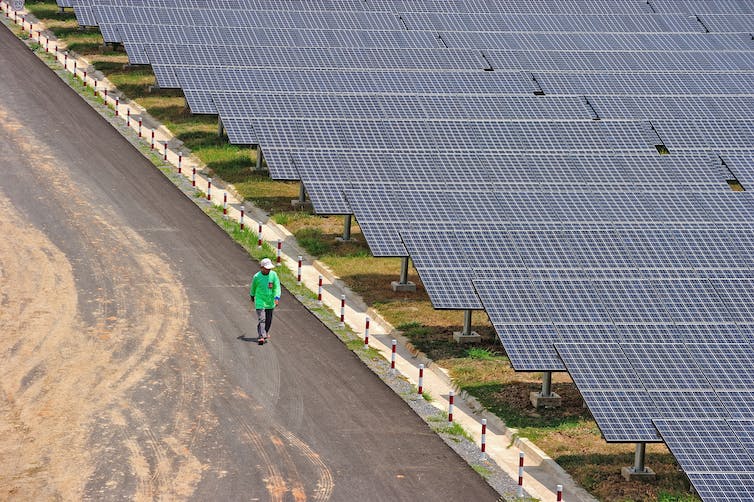 A Green New Deal will aim to kickstart manufacturing – can it be done without supercharging carbon emissions?
Think4photop/Shutterstock

Its supporters will have to manage this tension, even though the vast majority of the US left and environmental movement are behind it.

If one imperative is to build new infrastructure to get the US economy going, how much of this will really do more than pay lip service to the energy system transformation in practice? The “Green” in Green New Deal demands that all new infrastructure built is effectively carbon neutral.

Even new transit infrastructure, for example, would have to be entirely electric, at the same time as that electricity system is supposed to rapidly abandon coal and then natural gas. It’s easy to imagine which will win when that tension works its way through the political process.

It’s not that the Green New Deal isn’t worth pursuing – it’s an extremely promising development. It’s just important to remember Naomi Klein’s invocation that “this changes everything” – dealing with climate change is unlikely to lend itself to off-the-shelf solutions from an earlier age.

This article is republished from The Conversation
under a Creative Commons license. Read the original article.

Climate change? Not now, not in the US